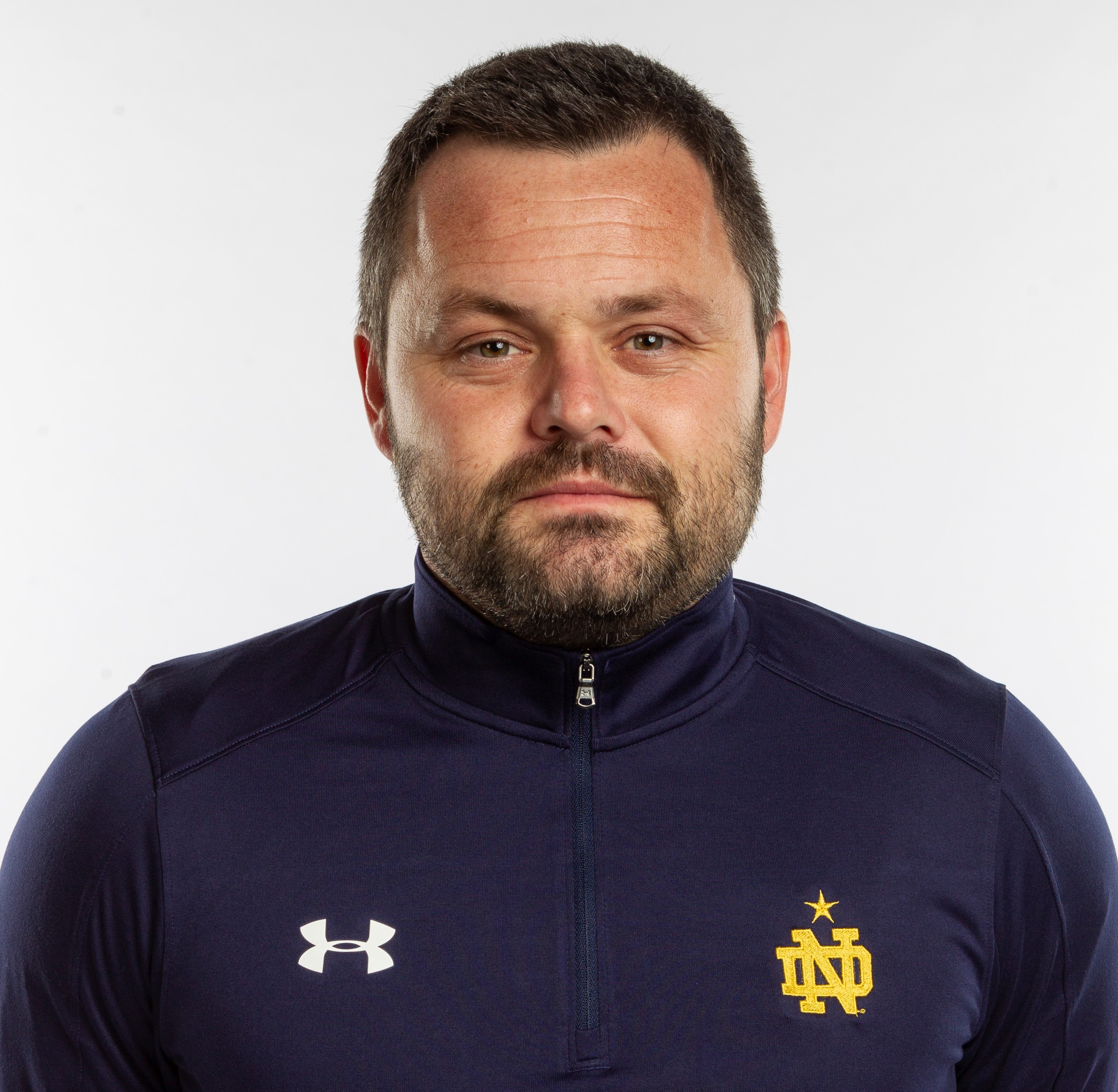 • Has reached five NCAA tournaments in six seasons as a head coach, including five straight

Chad Riley enters his second season as Notre Dame head coach of the men’s soccer program in the fall of 2019.

The head coach made an instant impact with the Irish in his debut 2018 season, leading the team to the NCAA Quarterfinals. The Irish went 11-7-3 during the 2018 campaign, defeating six ranked opponents, and earned the No. 7 seed in the NCAA Championship. Two student-athletes were named CoSIDA Academic All-Americans, as Thomas Ueland earned first team honors and Jack Casey took home second team accolades. Four Irish student-athletes earned All-ACC distinctions.

Riley served as the head coach of the highly successful Dartmouth men’s soccer program from 2013-17 and was a former standout Irish men’s soccer player and assistant coach. Riley was officially named the sixth head men’s soccer coach at the University of Notre Dame on January 4, 2018.

Dartmouth’s four consecutive league titles mark the first time that happened in the Ivy League in 32 years. Riley’s 2014 and 2015 campaigns accounted for the first back-to-back 12-win seasons in Big Green history, and his teams’ 45 combined victories from 2014-17 are a high-water mark for Dartmouth men’s soccer.

Riley has been part of NCAA Championship competition in 13 seasons—each of the last four years while head coach at Dartmouth, once as a St. John’s assistant coach, five times as an Irish assistant coach and each of his last three seasons as a player at Notre Dame. His Big Green teams won first-round NCAA Championship games in 2014 (Fordham), 2015 (Hartwick) and 2016 (St. Francis Brooklyn) and earned the number-15 NCAA national seed in 2017.

Riley replaced the legendary Bobby Clark who retired in late November following 17 seasons as Notre Dame head coach (2001-17). Riley played for Clark in 2001-03 during his final three Irish undergraduate years (and Clark’s first three seasons in South Bend) and remains one of the all-time Notre Dame leaders in assists (32 in 78 games). He also spent six seasons as an Irish assistant coach (2006-11) under Clark, and his official title at Dartmouth was the Bobby Clark Head Coach of Men’s Soccer in recognition of Clark’s nine seasons as Big Green head coach (82-42-13 record in 1985-93).

“Chad Riley not only brings to Notre Dame a track record of winning titles and regularly qualifying for NCAA Championship play, but having both played and coached for Bobby Clark he already has a great understanding of the culture this program has built over the last two decades,” said Notre Dame vice president and James E. Rohr director of athletics Jack Swarbrick.

“We expect Chad to have a seamless transition into his new assignment in great part because he has a perfect sense of the expectations and opportunities both on and off the field at Notre Dame. This is a program that has achieved at the very highest levels, including an NCAA title four years ago, and we are confident Chad has what it takes to continue that sort of achievement.”

Dartmouth finished with a combined 22-3-3 mark in Ivy League play over the last four seasons, and Riley’s 2013 and 2014 Big Green squads both enjoyed eight-game unbeaten streaks, with the 2013 version marking the first time that had happened at Dartmouth since 1978. Thirty-two Big Green players have earned some sort of all-Ivy League recognition over Riley’s five seasons as head coach. His 2014 and 2015 league champion squads permitted a combined seven goals in conference play over those two seasons. Riley’s last four Dartmouth teams achieved final NCAA RPIs of 16 (2017), 25 (2016), 20 (2015) and 23 (2014).

In 2012 Riley joined head coach Jeff Cook’s Dartmouth staff as an assistant coach, helping the Big Green to second place in the Ivy League standings and an undefeated home pitch mark for the second consecutive season.

A 2004 Notre Dame graduate with a degree in theology, Riley helped mentor four All-Americans, including 2006 MAC Hermann Trophy recipient Joseph Lapira as well as three Academic All-Americans while in South Bend.
Prior to returning to South Bend, Riley made coaching stops at Oberlin College in Ohio during the 2004 season and at St. John’s in 2005. While at Oberlin he helped guide the squad to a 9-8-3 record and helped five players earn all-North Coast Athletic Conference honors. During his season at St. John’s, the Red Storm posted an 11-6-5 record and a berth in the third round of the NCAA Championship.

Riley, a Houston, Texas, native (Cypress Springs High School), was a four-time monogram winner and a three-time all-BIG EAST award winner (second team in 2003, third team in 2002 and 2001) during his collegiate career. He tallied 52 career points on 10 goals and 32 assists as a midfielder. He led the Irish in assists in three seasons (including 12 in 2002), still ranks second on the Irish all-time assists list and served as an assistant team captain as a senior. Riley led the 2000 Notre Dame team in scoring with 12 points and was a BIG EAST Academic All-Star in 2000 and 2001.

He and his wife, Caitlin (also a Notre Dame graduate), are parents of two daughters, Georgina and Bernadette, and a son, Prescott.