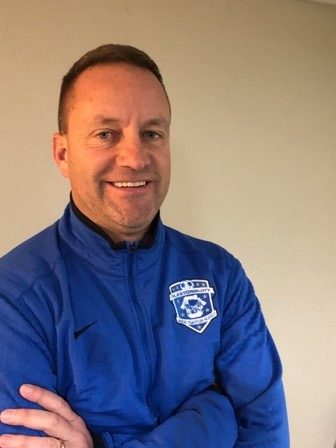 Mark Landers is a championship-winning boys soccer coach at Glastonbury High School in Glastonbury, CT. Landers has been a coach at Glastonbury High School for 27 years. In his 20 years as a head coach, Landers' teams have won 8 state championships and 15 league titles. He has a career record of 297-64-38. In addition to coaching soccer, Landers coached various sports, including club soccer, girls lacrosse, boys lacrosse, and youth basketball. Through the years, Coach Landers' teams have been actively involved in the community. His teams have participated in various community service events, which have included cancer fundraisers, education foundation events, community library book sales, and TOPS soccer. Landers, who is a 7th-grade teacher at Smith Middle School in Glastonbury, has built a winning culture on and off the field at Glastonbury High School.

The Landers family is well known throughout the soccer communities across Connecticut. Coach Landers' father, Robert, coached boys soccer for over 25 years at Wethersfield High School, and he spent nine seasons coaching girls soccer at Glastonbury High School. Coach Landers Sr. played in the first-ever NCAA Division I Championship game for the University of Bridgeport. He is in the Connecticut Soccer Hall of Fame and at the University of Bridgeport.

While building a winning culture at Glastonbury, Coach Landers has had to overcome tragic loss. After a six-year battle with breast cancer, Coach Landers lost his mother, Patricia, in the summer of 2005. Unfortunately, just three years later, during the soccer season, Coach Landers lost his older brother Bill to cancer. Landers also lost his mother-in-law Magali to leukemia in the spring of 2013. Despite all of these life-changing events, Landers has been able to build a championship soccer program that prides itself on love, unity, and family.

Landers who played soccer at Glastonbury High School and Eastern Connecticut State University is only the fourth head coach in the history of the school. In 1999, he took over for longtime head coach Ken Mehler. In his first season at the helm, the Tomahawks went undefeated 17-0-3 and won the program's fourth state championship (59, 60, 89). Little did anyone know this was only the beginning of an impressive coaching career. In his fourth season, the Tomahawks went 17-2-2 and won another state championship. In 2005, the same year he lost his mother, Landers' team, which went 12-3-1 in the regular season, defeated five league champions en route to another state title. Despite winning three state championships in his first six seasons, the next few years would prove to be difficult on and off the field of play.

In 2006, the team suffered its first losing regular season under Landers. After a 5-7-4 regular-season record, the #33 seeded Tomahawks won a qualifying game to get into the tournament. They went all the way to the state semi-finals and amazingly finished at 9-8-4. The next four seasons all proved to be bittersweet for Landers and his Tomahawks. After a 9-3-4 record in 2007, the Tomahawks lost 1-0 in the State Finals. One season later, in 2008, despite losing his brother suddenly to cancer, the Tomahawks returned to the finals with a 19-0-1 record before losing yet another title. Unfortunately, the next two seasons, the Tomahawks suffered tough season-ending losses. From 2008-2010 the Tomahawks compiled an incredible 48-3-3 record but did not win one state title.

Like, the beginning of his coaching career, the past seven seasons have been astounding for Glastonbury. The Tomahawks have won five state championships and compiled a tournament record of 23-2-1, including a recent run of 11 tournament games in which the Tomahawks did not allow a single goal. Coach Landers has built a championship-winning program in Glastonbury that emphasizes the value of lifelong learning and promotes citizenship.

Coach Landers, who was recognized as Connecticut Soccer Coach of the Year in 2005 and 2015 was also a Positive Coaching Alliance Double Goal Coach Finalist in 2013. He lives in Glastonbury with his wife Amy and three daughters Chloe, Mackenzie, and Kelsey.