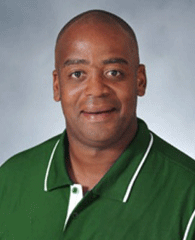 On Feb. 13, 2018, Dartmouth Director of Athletics and Recreation Harry Sheehy announced the hiring of Adegboyega “Bo” Oshoniyi as the Bobby Clark Head Coach of Men’s Soccer at Dartmouth College. He is just the 11th head coach in over 100 years of the program’s existence.

Oshoniyi spent the last four years as the head coach of the East Tennessee State University men’s soccer team, winning back-to-back, regular-season Southern Conference titles in 2016 and 2017 with a conference record of 13-1-6 over the last two seasons. His record as a head coach at ETSU is 36-24-15, with nine wins this past season and 12 in 2016. The 2016 and 2017 Southern Conference Coach of the Year led the Bucs to their first-ever, at-large bid to the 2016 NCAA Tournament.

During his four years coaching at ETSU, Oshoniyi led his team to wins over ranked opponents, including No. 1 North Carolina in 2016 and No. 15 Kentucky in 2015. In the 2016 season, the Bucs took four ranked teams into overtime, including top-ranked UNC, No. 12 Kentucky, No. 22 West Virginia and No. 25 Furman.

“I first would like to personally thank Harry Sheehy for trusting me to be the next men’s soccer coach at Dartmouth College,” Oshoniyi said. “I really enjoyed the process with [senior associate athletics director] Megan Sobel learning about the inner workings of Dartmouth College, both academically and athletically. I am excited to get to Hanover to meet the team and get to work.

“I also want to thank Dr. Sander, Scott Carter and President Noland for everything they have done for me and my family at ETSU. We will miss Johnson City and all the friends that we have made there.”

Prior to arriving at East Tennessee, Oshoniyi spent three seasons under Coach Bob Warming at Penn State as an assistant coach and the recruiting coordinator, helping lead the Nittany Lions to consecutive Big Ten titles, including the team’s first regular-season conference title in seven years in 2012.

In 2011, he helped tutor freshman Andrew Wolverton, the Big Ten leader in goals-against-average and save percentage. Wolverton would go on to become the school’s all-time single-season shutout leader with 12.

Oshoniyi served as an assistant coach and the recruiting coordinator at Wake Forest under Coach Jay Vidovich for two seasons before starting at Penn State. While coaching for the Demon Deacons, Oshoniyi helped lead the team to 25 total wins. One of his recruiting classes was ranked No. 1 in the nation by College Soccer News.

Before he started at Wake Forest, Oshoniyi spent a single season as an assistant at South Florida in 2008, as the Bulls finished 15-5-3, won the program’s first ever Big East Tournament title and advanced to the quarterfinals of the NCAA Tournament.

Oshoniyi spent 12 years playing professional soccer in the United States before beginning his collegiate coaching career. Following his graduation from Southern Connecticut State University with a degree in marketing, finance and communications in 1994, he began playing for the USL’s New York Centaurs, and played one season each for the Connecticut Wolves, Charleston Battery and Atlanta Silverbacks. In 1996, he was selected by the Columbus Crew in the inaugural MLS draft.

In 2000, Oshoniyi began a six-year stint playing for the Kansas City Wizards, winning Western Conference titles in 2000 and 2004, and the MLS Championship in 2000. He is the first African-American goalkeeper to start a game in the MLS, was a member of the U.S. team that competed at the World University Games in 1993 and played with the U.S. National B Team in 1994.

Oshoniyi was a two-time All-America goalkeeper at SCSU and helped lead the Owls to two NCAA Division II National Championships and four consecutive New England Collegiate Conference titles. He holds the record for most shutouts in a career in Division II with 50, was the Final Four MVP twice and claimed the Golden Boot Award, which is presented to the country’s best collegiate keeper. Following his legacy playing for the Owls, he was inducted into the Southern Connecticut State Hall of Fame in 2009.

“It is my great pleasure to welcome Bo, his wife Tippi, and his children, Xander, Londyn, and Rennick, to Dartmouth College and the Upper Valley,” Sheehy said. “Bo brings a strong soccer background ranging from being a collegiate All-American and MLS player to a very successful college coach. He understands the role of soccer in the education of our student-athletes. Bo is a passionate teacher and is a great fit for Dartmouth.”

Oshoniyi takes over a Big Green team that has won four consecutive Ivy League titles and eight in the past 14 seasons while advancing to the NCAA Tournament 11 times in that span. Dartmouth also had two players selected in the MLS Draft last month, including Wyatt Omsberg, the first Ivy Leaguer ever selected in the first round (15th overall).