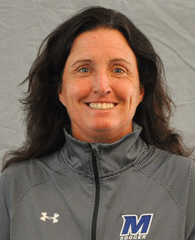 Head coach Krissy Turner, who is in her 21st season at the helm of the Monmouth University women's soccer program in 2018, has led the Hawks to five straight MAAC Regular Season Championships and consecutive MAAC Tournament titles.

The Hawks, who have captured the Metro Atlantic Athletic Conference (MAAC) regular season championship in each of their first five years in the league, have posted a 44-3-3 record in league play, while securing 31 shutouts in the 50 matches.

Monmouth, which has registered 12 straight double-digit win seasons, has recorded 57 shutouts over the past five seasons, and has continued its successful tradition in the classroom as well, producing 20 straight NSCAA/United Soccer Coaches Team Academic Award citations.

Turner, who has been named coach of the year eight times, has guided the Hawks to 159 wins over the last 12 campaigns, which has included five trips to the NCAA Tournament, including back-to-back appearances in 2016 and 2017.

Most recently in 2017, Monmouth captured the MAAC regular season and tournament championships for the second straight year and advanced to the NCAA Tournament for the fifth time in program history. Gabriella Cuevas was named the MAAC Defensive Player of the Year, while sophomore Amanda Knaub earned Goalkeeper of the Year honors. Turner earned her fourth MAAC Coach of the Year recognition after the Hawks went 9-1 in conference play.

In the 2016 season, Monmouth won the MAAC regular season and tournament championships and advanced to the NCAA Tournament for the fourth time in program history. Alexis McTamney repeated as the conference's Offensive Player of the Year, while Madie Gibson garnered Rookie of the Year honors. Turner was named the MAAC Coach of the Year for the third time in four years. As a team, Monmouth's offense led the NCAA with a 2.86 goals per game average.

In addition to the MAAC Awards, Turner and Gibson were named Coach and Rookie of the Year, respectively, by the ECAC in 2016. The accolades were the first major ECAC awards for the program in its history.

Nine Monmouth players earned All-MAAC honors, including Offensive Player of the Year Alexis McTamney in 2015. The Hawks captured the regular season title after posting a 9-1-0 league record for the second straight year.

In 2014, Turner placed nine on All-MAAC teams, including the program's second-straight Rookie of the Year, while earning the regular season title with a 9-1 mark in conference action.

In its first season in the MAAC, Monmouth captured both the regular season and tournament championships, en route to advancing to the NCAA Tournament for the third time in program history. In 2013, the Hawks tied a school-record for victories (17) and set a new program-mark for single-season shutouts (16).

The 2013 campaign was a banner one for the Hawks, posting a 17-2-2 overall mark, an unbeaten record in conference play (8-0-2), and a 14-game unbeaten streak, en route to the MAAC regular season title and MAAC Tournament Championship. The 17 victories matched a program-record (1994, 1995, 1996) and the team's 16 shutouts set a new school-record, while the Hawks finished as the 2013 NCAA Division I statistical leaders for shutout percentage (.762).

Monmouth, which finished 9-0-0 at home, placed a league-high 10 players on all-conference teams and hauled in four major awards as senior Dana Costello won Offensive Player of the Year, senior Ashley Lewis was tabbed the Goalkeeper of the Year and freshman Alexis McTamney was named the Rookie of the Year, to go along with Turner's Coach of the Year hardware.

In their final season in the Northeast Conference in 2012, the Hawks recorded their seventh straight double-digit win total, while earning a spot in their 15th league postseason as the No. 2 seed, and placed eight players on all-league teams.

In 2011, Monmouth posted its sixth straight double-digit win total and placed six members on All-Northeast Conference Teams, including a trio on the inaugural NEC All-Rookie squad. The Blue and White, which opened 0-3 and rebounded to go 11-8 on the year, came within a double-overtime penalty kick of reaching the tournament championship game, but registered victories over NJIT, Lehigh, Saint Peter's and Columbia in non-conference action, in addition to going 7-3 in league play.

In 2010, the Hawks cracked the NSCAA National Rankings following their victory at #17 Rutgers early in the year. MU, which had three seniors earn all-conference honors, upped Turner's All-NEC player selections to 48 in her tenure in West Long Branch, as Ali Kliment, Lia Fierro and Mary Wilks were all lauded. In addition to her second straight first-team honor, Kliment was named the Northeast Conference Scholar Athlete of the Year for a second time, and earned NSCAA Academic All-America status.

The Hawks, who went 10-6-2 on the year in 2010, opened the campaign 4-0 behind the victory over Rutgers and a 2-1 triumph over regional power Boston University. The Blue and White also finished in a tie for fourth place in the NEC standings with a 5-3-2 mark.

In 2009, Monmouth captured its second league title in three years after posting a pair of one-goal victories in both the semifinal and final to earn a berth in the NCAA Regional, where the Hawks battled No. 4 Maryland. Over the campaign, Monmouth notched a 15-5-1 record, its highest win total since the program registered three straight 17-win campaigns from 1994-96, and placed five Hawks on the All-NEC First-Team, for the third time in program history. Monmouth, which was paced offensively by junior All-Conference member and NEC Tournament MVP Mary Wilks, added Andrea Lopez, Courtney Snyder, Lia Fierro and Defensive Player of the Year Ali Kliment to the all-league team.

Turner, who has guided the Hawks into the regional rankings on numerous occasions over the past few seasons, became the third head coach in Monmouth history in 1998, leading the Hawks to a 9-11-1 record in her first season in West Long Branch. Coach Turner earned her first 10-win season in her second campaign, as she guided Monmouth to a 10-6-2 mark, and a 7-1-1 ledger in the NEC.

In 2008, the Hawks recorded their third straight double-digit win season, going 14-4-1 overall. Paced by break-out seasons by senior Joanna DeMoor and junior Alessandra DeTata, who each earned first-team all-conference honors, Monmouth posted a perfect 8-0-0 mark on The Great Lawn, and outscored its opponents 41-20.

The 2007 campaign saw the Monmouth program reach new heights, as the Hawks won both the conference regular season championship and conference tournament title, while advancing to the NCAA Tournament.

Turner led the Hawks to a 14-win season to earn her second NEC Coach of the Year award in 2006, guiding the Hawks to the league championship game. The Hawks' 14 wins was the highest total for Monmouth since the 1996 campaign, as the Blue and White went 8-0-0 at home. Monmouth's 7-1-1 league mark led to five Hawks earning all-league honors, including NEC Player and Rookie of the Year Andrea Lopez, Defensive Player of the Year Brittani Heller, Amy Hoyer, Katie Buffa and Illiana Blackshear.

Turner joined the Monmouth coaching staff as the head coach after a three-year stint at Lafayette College in Easton, PA.

In her final season at Lafayette, Turner guided the Leopards to the school's most wins (five) since 1992. She also coached several All-Patriot League performers, including the league's Newcomer of the Year.

Turner joined the staff at Lafayette following a highly successful tenure as an assistant women's soccer coach at The College of New Jersey (formerly Trenton State College). During her three years in Ewing, the Lions posted a trio of 20-win seasons and won back-to-back NCAA Division III National Championships in 1993 and 1994.

As a player, Turner was a two-year team captain for the Lions. She earned All-America honors as a senior and All-Northeast Region accolades after her junior and senior seasons. Her 12 assists in one season stood as a single-season record until 2001.

Prior to joining the Lions, Turner played two seasons at the University of Rhode Island, where she was named the 1988 URI Rookie of the Year, and the 1989 team Most Valuable Player for the Rams.

Turner has also been a staff member of US Soccer's National Training Centers Program (this program recommends New Jersey female players to the Youth National Teams and trains top players in the stats in younger age groups) since July 2014.