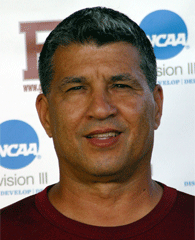 The University of Redlands welcomed Ralph Perez as the Head Men’s Soccer Coach in May of 2006. Perez joined the Bulldog Athletic family with a wealth of knowledge as a collegiate head coach and as an assistant coach at the professional and national level.

Perez brings an incredible amount of soccer knowledge due to more than 30 years of coaching experience. He joins the Bulldogs after serving as the Men’s National Staff Coach for the West Region of the U.S. Soccer Federation since 2005. Beginning in 1978, Perez worked as U.S. National Staff Coach, helping the U.S. Team qualify for the World Cup for the first time in 40 years in 1990. He also led the 1989 World Cup under-20 team to a fourth-place finish, boasting the best results for that team in program history. From 1996 through 2003, he worked as an assistant coach for the Los Angeles Galaxy and New York-New Jersey Metrostars, prior to serving as the Director of Coaching and Youth Development from 2003-2005.

On the collegiate side, Perez enjoyed head coaching stints at Division I Old Dominion University (VA), Santa Clara University and Cal State Fullerton, along with Division II Cal State San Bernardino (women’s) and Cal State Los Angeles. Finally, Perez began his coaching career at the Division III level in 1974, heading up the men’s program at Southern California Intercollegiate Athletic Conference (SCIAC) member, Whittier College. While at ODU, Perez led the Monarchs to their first and only Colonial Athletic Association Championship in 1991. He garnered South Atlantic Region Coach of the Year honors following that accomplishment. Perez helped establish the CSU San Bernardino women’s soccer program in 1988 by serving as the team’s first coach. During his stint at Santa Clara, Perez was named Far West Coach of the Year in 1983.

During his eight seasons with Redlands, he has guided the team to four NCAA Championship appearances, including an Elite 8 finish in 2007 and a Sweet-16 finish in 2011. In December 2011, Perez was honored as the National Soccer Coaches Association of America (NSCAA) West Region Coach of the Year. He has coached five SCIAC Players of the Year, and in 2009, one of his biggest success stories, Ross Schunk, signed a contract with the Colorado Rapids of Major League Soccer (MLS).

In January 2012, Perez was honored as the recipient of the Walt Chyzowych Lifetime Achievement Award. This exceptional award is considered to be the pinnacle of coaching honors in the United States.