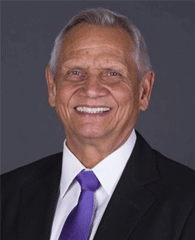 Schellas Hyndman is in his fourth year at the helm of the Grand Canyon men's soccer program in 2018 after he was named the third men’s soccer coach at GCU on Jan. 13, 2015.

In 34 years of coaching, Hyndman has compiled a record of 487-150-55 and has qualified his teams for the NCAA Tournament in 30 of 32 eligible seasons.

In his three seasons as head coach at GCU, Hyndman has taken great strides in more than just wins and losses. In 2016, the team debuted at GCU Stadium to the largest crowd to watch a soccer game in Arizona history: 6,402 fans. GCU finished No. 7 in the country in average attendance in 2017, drawing 2,508 fans per match. While at GCU, Hyndman has a record of 21-30-4 and finished fifth in the WAC in 2016, five spots higher than the previous year.

In the Lopes' first season of NCAA Division I postseason eligibility in 2018, they qualified for the WAC Tournament.

Hyndman brings with him extensive head coaching experience, including 34 years of collegiate coaching experience -- 24 years at SMU, seven seasons at Eastern Illinois and the remaining years at GCU. Hyndman compiled a record of 466-122-49 entering his 2015 GCU debut, giving him the 12th-highest winning percentage in Division I men's soccer (.770) at the time.

Hyndman served as the head coach for FC Dallas of Major League Soccer from 2008 to 2013. He took Dallas to the MLS Cup Final in 2010, when he was named Coach of the Year.

Before serving as head coach for FC Dallas, Hyndman took over the SMU men's soccer program in 1984 and produced winning seasons in each of his 24 years there, finishing with a 368-96-40 record. Under Hyndman, SMU made 22 NCAA tournament appearances, advancing to the quarterfinals 11 times and the College Cup twice. Additionally, SMU won six conference tournament championships and nine regular-season conference championships under Hyndman, who won conference Coach of the Year awards eight times with the Mustangs.

Hyndman coached a Hermann Trophy winner, two NSCAA Players of the Year, and 21 All-Americans -- including 10 first-team honorees -- at SMU.

Prior to his tenure at SMU, he was named the 1981 National Soccer Coaches Association of America (NSCAA) Coach of the Year while serving as the head coach at his alma mater, Eastern Illinois. That season, Hyndman's team finished third in the NCAA playoffs in its first year at the Division I level. Hyndman was inducted into the EIU Hall of Fame in 2001 after taking the Panthers to the NCAA playoffs in each of his seven seasons.

In 2001, Hyndman was selected to serve as a member of the NSCAA Executive Committee and served as president of the organization in 2005. He was awarded with the NSCAA Director of Coaching Emeritus title in recognition of outstanding coaching achievements in 2003, becoming just the fourth coach in the history of the organization to achieve the title.

Following his collegiate playing days, Hyndman played professionally for the Cincinnati Comets of the American Soccer League in 1975.